Rabbit in the Moon quilt winner

Our 2016 raffle winner for the handmade Rabbit in the Moon quilt was Ann W from British Columbia (BC)!  Ann has two house rabbits, has been active in local rabbit rescue efforts in Canada, and is a fervent bunny advocate

Ann met NMHRS volunteer Iris at a rabbit rescue event in Vancouver and learned of the NMHRS quilt raffle from Iris’s Facebook page. She purchased her winning raffle ticket online just before the deadline.

Ann and Iris are part of a group of rabbit lovers helping raise funds for spay/neuter and transport of over one hundred dumped, domesticated rabbits living alongside a busy interstate in an area called View Royal in BC. The volunteers secured a sanctuary for these buns in Texas. The first group of forty two View Royal buns passed through Albuquerque in early May bound for Texas. Many NMHRS volunteers stayed up late performing rabbit care duties for those rabbits as they were in transit – see Ned’s story in the last issue of “Rabbit Tracks”.

Their mutual love for rabbits connected both groups together and benefitted needy rabbits from BC and NM!

We couldn’t be more happy that volunteer Deb’s handiwork went to such a great home. The quilt was hand delivered to Ann by Iris on her way back to BC. Ann took a picture for us, and wrote us a note.

Just a note to say thank you very much for the opportunity to win the 2016 NMHRS Quilt. It truly is a work of art, and I very much appreciate the work and skill that went into it. Thank you to Deb, and all your hardworking volunteers.

I live on Vancouver Island, BC, near Victoria with my husband and my furkids: Briggs (chinchilla) and Evie (lionhead). I ride motorcycles (sportbikes) a lot, and show my ’06 Mustang. I have started taking a few bike trips to the states and would just love to ride to New Mexico someday! 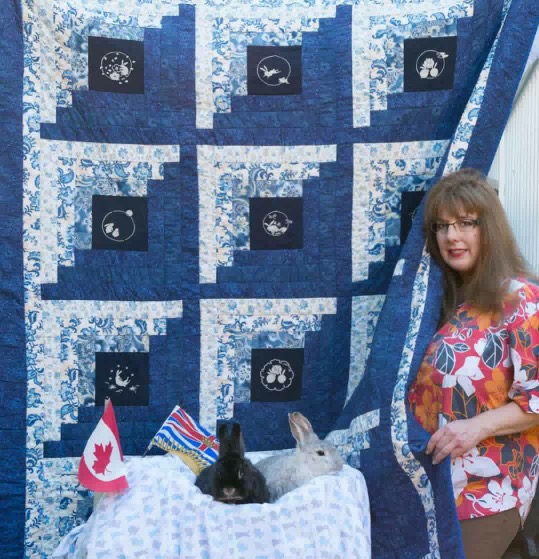 Ann from BC with the quilt, Briggs (chinchilla) and Evie (lionhead)