Why Spay and Neuter Your Rabbit? 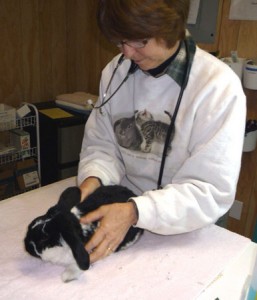 Is surgery safe on rabbits?

Surgery can be as safe on rabbits as on any animal. Unfortunately, the vast majority of veterinarians aren’t experienced with safe rabbit surgery techniques. Don’t allow a veterinarian with little or no experience with rabbits spay or neuter your rabbit. Using isofluorene as the anesthetic and appropriate surgical and after-surgery techniques, spaying and neutering of rabbits is as safe as for any other animal.

At what age should rabbits be spayed or neutered?

Ideally, your rabbit should weigh at least 3 pounds before going into surgery.

Females can be spayed as soon as they sexually mature, usually around 4 months of age, but many veterinarians prefer to wait until they are 6 months old since females have a high risk of bone density loss when spayed too young.

Males can be neutered as soon as the testicles descend, usually around 3-1/2 months of age.

When is a rabbit too old to be spayed or neutered?

Veterinarians will have their own opinions on this, but in general, after a rabbit is 6 years old, anesthetics and surgery become more risky.

It is always a good idea, in a rabbit over 2 years of age, to have a very thorough health check done, including full blood work. This may be more expensive than the surgery, but it will help detect any condition that could make the surgery more risky. This is especially important if anesthetics other than isofluorene are used.

Can you tell if female rabbit has already been spayed?

The probability is very high that she hasn’t.

One can shave the tummy and look for a spay scar. However, when veterinarians use certain stitching techniques, there is no scar whatsoever. Hopefully, these veterinarians will tattoo the tummy to indicate the spay has been done, but otherwise, the only way of knowing is to proceed with the surgery.

What does the surgery cost?

Spay/neuter costs vary tremendously in different areas of the country. The low end of the range can be as inexpensive as $50-75 (often in spay/neuter clinics), while vets in major metropolitan areas, where rents and labor costs are very high, often charge several hundred dollars. The Santa Fe Shelter spay/neuter clinic has the only low-cost spay/neuter for rabbits in New Mexico. They also tattoo a mark in the rabbit’s ear to indicate the bunny has been altered.

What pre- and post-operative care should one give?

It’s important to not change anything for your rabbit before the surgery, especially the diet. Since rabbits cannot vomit they have no risk of aspirating during surgery. This means that they should NOT fast the night before surgery like a dog would. Fasting your rabbit may result in death since it is crucial that their digestive tract is always moving. If your vet tells you to remove all food, you need to find another vet.

After the surgery, ask your veterinarian for pain medication, especially for a spay. Pain meds should be given once or twice daily for three days following the surgery. The most common pain med for rabbits is meloxicam (also known as metacam).

Inspect the incision morning and evening. After a neuter, the scrotum may swell with fluids. Warm compresses will help, but it is nothing to be overly concerned about. With any sign of infection, take the rabbit to the veterinarian immediately.

After surgery, keep the environment quiet so the rabbit doesn’t startle or panic, don’t do anything to encourage acrobatics, but let the rabbit move around at her own pace– she knows what hurts and what doesn’t.

After coming home on the first night, note the following:

The following morning it is important for the rabbit to be nibbling something. It doesn’t matter what or how much, as long as she is taking in something, so the digestive tract won’t shut down. If she isn’t, tempt her with everything possible (try banana), and as a last resort, make a mush of rabbit pellets (1 part pellets, 2 parts water) and feed in pea-sized bits with a feeding syringe through the side of the mouth. You can feed Critical Care in place of homemade pellet mush.