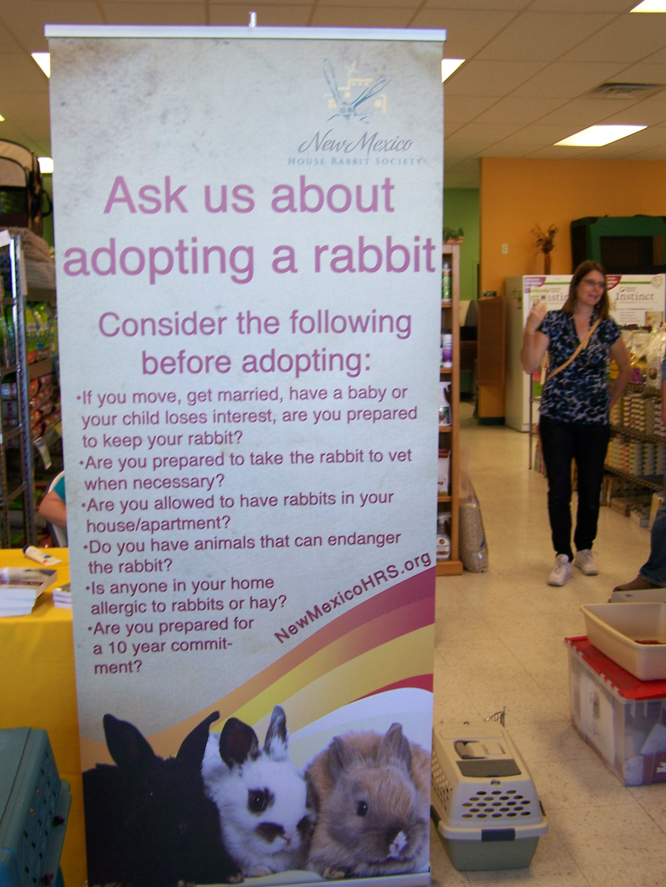 What kind of rabbit should I get? Am I the right person, and is my home the right kind of home, for a rabbit?

Just like most babies of any species, they chew on practically anything they can get their teeth on. There are two reasons for this: chewing helps build strong jaw muscles; chewing is how bunnies learn about their world.

Adult rabbits usually don’t chew as much as youngsters do, and when they do, they chew primarily because it is fun or because something tastes good, so young rabbits tend to be more destructive than adults.

Prior to puberty, most baby rabbits seem to be willing to let a person do almost anything with them, although they are, of course, high energy creatures, and refuse to be held for very long. Puberty hits between 2½ and 3½ months.

Males may seem “aggressively friendly,” seeking out anything that moves…and even things that don’t…to vent their sexual frustrations on. This is often misinterpreted as friendliness, but it can also result in the surprise of teeth and claws buried in flesh so the rabbit can hang on while giving the object of his affection “what for.”

Females may become very grumpy when puberty hits. We think of this as “Bunny PMS.” Unfortunately, it tends to last until the female is  spayed. Rabbits should be spayed or neutered as early as is feasible if they are to be house rabbits. This is for both behavioral and health reasons.

As teenagers, rabbits are highly energetic. Easily bored, they may turn everything into an object of fun. Litter (and everything deposited in it) may be thrown across the room as rabbits practice their digging skills. Towels, wood, and plastics may be chewed up. Within hours, a rabbit can turn a neat, clean bunny space into a shambles.

Some people are allergic to rabbits, even if they aren’t allergic to other animals. Many animals are left at shelters because people don’t learn ahead of time whether anyone in the family is allergic to them. Please don’t contribute to this problem! Before getting any animal, find out if anyone in the home is allergic to him. In the case of rabbits, people may also be allergic to the hay which is the most important part of a rabbit’s diet. You can determine your family’s allergic potential by visiting an allergist, or by spending time with rabbits before you adopt.

Rabbits and well-trained dogs can live together and make great companions, as can rabbits and cats with low prey drives. Terriers, dachshunds, and many other breeds often have strong natural instincts to kill small animals because they were originally bred for this purpose.  Additionally, friendly dogs may seriously injure or kill a rabbit just by trying to play. Don’t risk the life and well-being of a rabbit by taking it into your home unless you have determined your dog or cat will not be a threat to the rabbit. For this reason we only adopt to families with dogs after we have met the dog and assessed their behavior around rabbits.

Rabbits are NOT suitable pets for young children:

If you want a rabbit for the whole family, not just the children, and plan always to supervise children around the rabbits, it is better to get a large, mature adult rabbit who has demonstrated he or she is willing to tolerate petting from children.

Never, under any circumstances, get living creatures on the basis that you will get rid of the animal if a child fails to care for them. No child can live up to the promise of taking care of animals for an indefinite period of time. It is cruel to the animal to be disposed of, as though her emotional pain when separated from those she has bonded to, is of no concern. If anything, this teaches a child you don’t take responsibility and that the child doesn’t have to either. Such consequences should apply only to inanimate objects. (“We’ll get a book at the library, but if you don’t read it within two weeks, we’ll take it back and leave it.”) With living creatures, teach life-long commitment.

Please remember that rabbits can live over 10 years, so parents must be willing to care for the rabbit when their child goes to college or moves out.

Be a role model to teach responsibility for living things to children. Say to a young child: “The rabbits are hungry. Let’s feed them.” Going with the parent makes it fun for children, especially when they are allowed to do more and more of the job themselves, with a parent helping and praising their efforts, or commenting on how happy they have made the rabbits. With an older child, use a reminder if required: “The rabbits need their dinner now” with some consequence. “You can’t eat supper until the rabbits have had theirs”; followed by a check to be sure the job has been done right.

One Rabbit or Two?

Rabbits are extremely social animals who need companions of their own kind – singles can be very lonely. HRS recommends that rabbits have companionship of their own kind. Rabbits are most easily paired male-female (when fixed), but they are very picky about mates since they will bond deeply and for life. Female-female and male-male pairings are possible as well.

Rabbits must be altered to be good companion rabbits. Females who aren’t spayed may be cranky and hard to get along with, and have an 80% probability of developing uterine cancer by the age of five years. Males may spray and hump anything that moves. Spaying and neutering solve these problems, usually within days. Use only a veterinarian trained in the special techniques required for safe surgery on rabbits, and one who has a success rate of almost 100%.

It is as cruel to keep a rabbit in an outdoor hutch as it would be to keep a dog that way. Rabbits in hutches lack mental stimulation, which can cause them to become “furry vegetables,” living in a vegetative state not very different from being in a coma. These unfortunate rabbits usually receive very little affection, and may become psychotic leading people to label them as a “mean rabbit.”  Wouldn’t you become “vegetative” or “mean” in a similar situation?

If you want to keep your rabbit in a hutch, think about going out twice a day no matter what the weather, to give food and fresh water and getting nothing in return. Such rabbits tend to become nothing but a chore for their people. Why would anyone choose to take on another chore with no benefit to themselves? People who keep rabbits in outdoor hutches usually end up asking a shelter or other people to take over their responsibilities. This is unfair to the rabbits and to the shelters, alike!

It is extremely dangerous to let rabbits run freely in a fenced yard without supervision. Rabbits who have done so safely for years almost always end up dead due to predators or temperature extremes. The excuse “But they love it so much!” is like saying, “My three-year old loves playing in the street, so in spite of the danger, I’ll let her. Even if she gets killed, she will have had a lot of fun.”

It is far better to keep your rabbit in the house, preferably in a family room or wherever the family is most likely to be most of the time. The rabbit needs a home of their own – we call them enclosures, condos or “rabbitats” – but the rabbit should feel this is a safe and pleasant place belonging to him/her. Rabbits are easily litter-trained and can gradually be given the run of the house if you follow the techniques found in articles about house rabbits on rabbit.org concerning litter and behavior training. Rabbits are easily trained to behave well in the house, but because they have a psychology quite different from dogs and cats, you will need to learn the simple techniques needed to train them.

In summary, rabbits make wonderful house companions! They are entertaining, affectionate, have very unique personalities, and given time, patience and understanding, they become an integral part of the household.